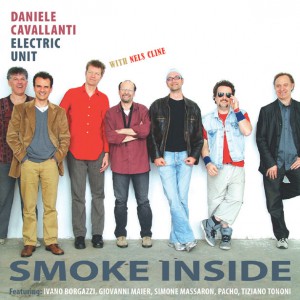 Buy it on BandCampBuy on iTunes

This record celebrates the meeting of the best pre-fusion electric jazz with the vibe of the best instrumental rock. Daniel Cavallanti, a veteran sax player from the critically acclaimed groups Nexus and Italian Instabile Orchestra,” joins forces with his old friend Nels Cline and some great Italian jazzmen to crate daring music, classical and modern and fresh at the same time. You get long original compositions dominated by a strong and pulsating rhythmic feel, no-nonsense melodies and extended, soaring solos. “A large group of Italians and I recorded this, a set of “electric jazz”, in Milan for Long Song Records. It’s very early 70s style, and almost everyone involved with this fun record are old enough to really know how to play this stuff in the pre-FUSION way, which is to say, pre-“popping”, pre-“symphonic”, pre-CRAPPY… Daniele, who I met and played with about 13 years ago, has a sound that reminds me of the great (and, sadly, recently departed) Dewey Redman.” -Nels Cline

Smoke Inside is performed, among others, by