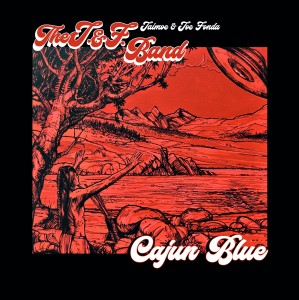 “The J. & F. Band with CAJUN BLUE manages to bring together the coolness of jazz and the sincere roughness of blues, and then psychedelia and avant-garde and soul music. With rock’n’roll guitars and a New Orleans brass section, in a two-day recording this band was capable to evoke the fury of the sessions that echoed in the Muscle Shoals studios in the 70’s” (Luca Salmini, Buscadero Rock Magazine).

Following the massive critical success of the first record “From The Roots To The Sky” the J. & F. Band is back with a new amazing effort, shining with new soul elements and impressive bluesy guitar work, thanks to the contribution of singer Lamar Williams Jr. and legendary Texan guitar player David Grissom.

Joe Fonda says: “This is the second J. & F. Band recording. We reached a new level of depth and deliverance, execution and groove on this recording. I also want to comment on the material that both I and drummer Tiziano Tanoni arranged and composed — I think it’s on another level. This is a band that will most certainly just keep rising to new heights . Prepare yourself — we’re getting ready to do a third recording in the near future. In the meantime enjoy this recording and go check out the first one — all full of pure musical Joy”

praise for the first record FROM THE ROOTS TO THE SKY:

“Beautifully recorded, this album belongs in the collection of all serious jazz and Allman Brothers fans”

“A double disk as in the old days, but out of any time: much less predictable than I told it, much more beautiful than I could say”

Cajun Blue is performed, among others, by