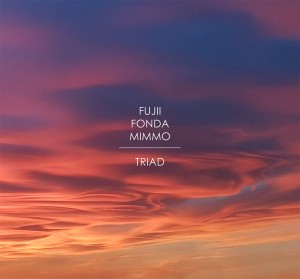 The second CD in a series of compelling releases featuring the lady of avant jazz Satoko Fujii and bass giant Joe Fonda, now with the addition of sax soprano master Gianni Mimmo. The result of a totally improvised one day studio session, “Triad” is a marvellous achievement in daring and spectacular avant jazz music.
What better way for pianist-composer Satoko Fujii to celebrate turning 60 than with an album recorded on her birthday. Last year, Fujii, bassist Joe Fonda, and Italian soprano saxophonist Gianni Mimmo went into the studio to record Triad (May 25, 2018, Long Song Records) on Fujii’s 59th birthday. Though they had only played together once, in concert the night before, the trio is remarkably confident and communicates on a deep level. The music is unhurried and graceful, yet always challenging.
Fujii and Fonda were planning a European tour in October 2017 and asked Long Song label owner Fabrizio Perissinotto, who released their 2016 album, Duet, if he knew of any opportunities to perform in Italy. Perissinotto talked with his good friend Mimmo and a concert and recording session were arranged. (In July, Long Song will release another Fonda-Fujii duet album recorded later on the same tour.) They had never heard Mimmo before, but “Joe and I listened to his music and we both had the feeling this would be great,” Fujii says.
They were wise to trust their feelings; the album is consistently engaging. The music they make transforms and flows effortlessly while always maintaining focus. There is no sense of Mimmo intruding on established duo partners, but instead there’s a beautiful, almost classical, balance to the ensemble, with each musician engaging equally in an intimate conversation. The centerpiece of the album is the 40-minute long improvisation, “Birthday Girl,” a title which highlights Fujii’s youthful spirit. The music evolves organically as the trio splits into different instrumental combinations and shifts between lyricism and abstraction, highly rhythmic passages and gently flowing ones.
It’s just amazing how we can communicate with other musicians even if we don’t speak the same language,” Fujii says. “Of course, there are certain things we only can say with spoken language, but musical language is a more direct communication between soul and soul.”
After their marathon improvisation, they decided to play several shorter pieces to round out the album. Each one is distinct in character. “Accidental Partner” is a quiet little gem that unfolds over Fonda’s rich bowed tones. “No More Bugs” is a busy piece in which the players scurry around one another. The spare, powerfully atmospheric “Available Gravity” neatly balances abstraction and pure sound with lyrical wood flute and soprano sax. “Joe Melts the Water Boiler” is a tightly integrated collective improvisation.
I think all my musical experience prepares me for improvisations like this album,” Fujii says. “Practicing and composing both feed into improvisation. I just need to trust myself and accept myself. Actually, my whole my life is practice for free improv.”
Joe Fonda “is a serious seeker of new musical horizons,” says the Boston Phoenix. From 1984 to 1999, he was the bassist with composer-improviser and NEA Jazz Master Anthony Braxton. Fonda also has been an integral member of several cooperative bands, including the Fonda-Stevens Group with Michael Jefry Stevens, Herb Robertson, and Harvey Sorgen; Conference Call, with Gebhard Ullmann, Stevens, and George Schuller; the Fab Trio with Barry Altschul and Billy Bang; and the Nu Band with Mark Whitecage, Roy Campbell, and Lou Grassi. He is currently a member of The 3dom Factor, Altschul’s trio with saxophonist Jon Irabagon, and guitarist Michael Musillami’s trio, among others. He has led some truly unique ensembles of his own including From the Source, which features four instrumentalists, a tap dancer, and a body healer/vocalist; and Bottoms Out, a sextet with Gerry Hemingway, Joe Daley, Michael Rabinowitz, Claire Daly, and Gebhard Ullmann. He has released twelve recordings under his own name.
Improviser and composer Gianni Mimmo has built an international reputation for his unique treatment of musical timbre and his exploration of advanced techniques on the soprano saxophone. Based in Milan, Italy, Gianni is known for his innovative cross-disciplinary projects with poetry, photography installations, and film, as well as solo performances and international collaborations with improvisers in the US and throughout Europe. He has worked in duos with US cellist Daniel Levin, Basque guitarist Xabier Iriondo, English violinist Alison Blunt, pianist Gianni Lenoci, and fellow soprano saxophonist Harry Sjöström. He is a member of improvising ensembles the Shoreditch Trio and the Wild Chamber Trio. He performs improvised scores for film, composes graphic scores for chamber quintets ands of poetry and spoken word texts. He has operated Amirani Records since 2005.
Critics and fans alike hail pianist and composer Satoko Fujii as one of the most original voices in jazz today. She’s “a virtuoso piano improviser, an original composer and a bandleader who gets the best collaborators to deliver,” says John Fordham in The Guardian. In concert and on more than 80 albums as a leader or co-leader, she synthesizes jazz, contemporary classical, avant-rock, and Japanese folk music into an innovative music instantly recognizable as hers alone. Over the years, Fujii has led some of the most consistently creative ensembles in modern improvised music, including her trio with bassist Mark Dresser and drummer Jim Black, the Min-Yoh Ensemble, and an electrifying avant-rock quartet featuring drummer Tatsuya Yoshida of The Ruins.
Fujii exhibits a kind of boundless exploration that finds her often in new pairings or with new lineups, a never-ending pursuit of new sounds, new groups, and new collaborations.” – Lee Rice Epstein, The Free Jazz Collective
Joe Fonda is a real virtuoso and composer of the highest order.” – Anthony Braxton
Mimmo’s music . . . is based on balance. Not only the moment-to-moment balance of register, phrasing, dynamics, and articulation, but a larger, more fundamental balance of abstraction and direct lyricism.” – Daniel Barbiero, Avant Music News