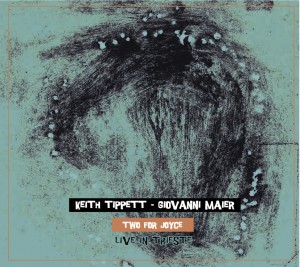 Keith Tippett, a backbone of English and European piano jazz/avant for more than 40 years and Giovanni Maier, one of the best and most respected Italian jazz bassists of the past two decades, have known each other for a long time. They played together in the past with Pino Minafra’s ensemble  “Viva La Black”.

But recently, their mutual respect has launched a concert as a duo. This concert of May, 2012 happened in Trieste during the “Le Nuove Rotte del Jazz” (New Routes in Jazz) Jazz Festival.

“Two for Joyce – Live in Trieste”, a new cd from Long Song Records/Audioglobe is the successful account of their performance. 50 minutes of improvised music, a long track of music that shows the vast range of their abilities wonderfully. According to some, Tippett gives his best both alone and in a duo, which is not to diminish his excellent work to date in many ensembles. He is a profound and inventive pianist, austere and grandiose at the same time, as when there’s a waterfall of notes and sounds that only he can create. Pay close attention to his “preparations” on the piano which find an ideal parter in Maier.

Maier is as noted, dense, heavy, substantial and always lucid. A real maestro with his instrument. Coming together like this, they sweat intelligence and irony. It’s stimulating but it never loses that tension. It’s a musical adventure of great weight, a exemplary conversation of dovetails, of action and reaction. “Two for Joyce – Live in Trieste” is definitively a new and important piece in the great tradition of european improvisation.

Two For Joyce is performed, among others, by