Put A Sock In It 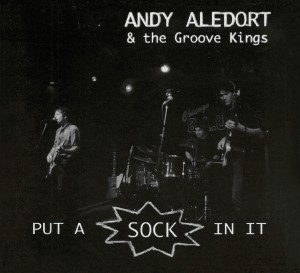 “Andy Aledort has been my favorite new guitar player for a long time now.”—Joe Satriani

“I’m always trying to find the best guitar player I can, and Andy’s playing is really great. He’s a true player!”—Dickey Betts

“What a soulful player. Andy knows music inside and out.”—John Scofield

“The blues is a multi dimensional world of tone, color and emotion. When we play the blues effectively we speak from our core. When Andy plays, his love and sincerity for the blues is moving. The amazing tone in his fingers offers an authentic and classic blues rock experience.
He is independent, focused and committed to his love for his craft.”-Steve Vai

We are very excited to announce the re-release of Andy Aledort and the Groove Kings’ brilliant 1999 album Put A Sock In It.

It sounds as fresh and exciting now as it did 20 years ago. That’s an impressive feat, but it won’t be a surprise to anyone familiar with Aledort, a musician’s musician and guitarist extraordinaire, who has taught millions to play with his instructional writing…  more

Put A Sock In It is performed, among others, by