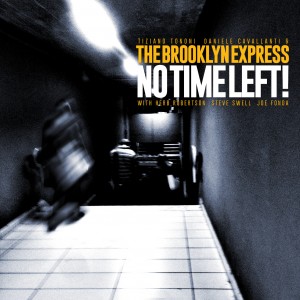 Tononi and Cavallanti, as always proud heirs to the great “black” music of the 60’s and 70’s, they celebrate their roots with a great new work. Recorded in Brookyn (that’s where the name for the band “The Brooklyn Express” comes from) “NO TIME LEFT!!” comes from the meeting of old and new friends who were legends from the NY avant and improv scene. Trombone player Steve Swell, bassist Joe Fonda and trumpeter Herb Robertson are names that need no introduction for people passionate about the genre. Their long list of collaborations with the greats is infinite (names at random: Anthony Braxton, Leo Smith, Archie Shepp, Bill Dixon, Peter Brötzmann, William Parker, Cecil Taylor, Tim Berne, Barry Altschul, and so forth…), as are their solo productions.
Adding to this is the demographic factor: all five were “born in the fifties” and have followed similar paths of artistic and professional development.
So, more than ever there is this huge affinity, like “THIS IS OUR MUSIC” !!

From this kindred spirit and innate empathy a music is born that unites coordinates already known to those who follow these two Italians. Especially in their compositions, a portion of which is decisively adventurous, free, and completely improvised, in the best lineage of their tutors.
We find tributes to Ornette Coleman (to whom the album is dedicated), Bill Dixon, Gil Evans, Jim Pepper. There is also a tribute to Andrew Cyrille (who came by during the recording session to pay homage to his “children”. Tononi was a student of his). The title of a long piece is dedicated to Cyrille.

The whole album sweats passion and honesty and presents itself as a strong homage to an immortal music that has inspired generations of musicians, one that has never bent to commercial interests.

No Time Left! is performed, among others, by