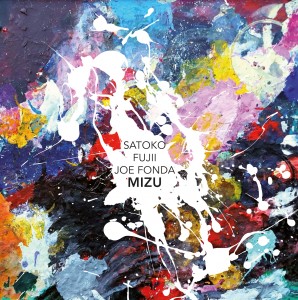 “The degree of intimate listening and deep exchange between Fujii’s piano and the woody, natural-sounding bass of Fonda is breathtaking.” — Robert Bush, NBC San Diego

“The conversation is intuitive, at times seemingly telepathic — and it creates an enormous amount of drama and joy.” — Steve Feeney, The Arts Fuse

On Mizu, pianist-composer Satoko Fujii and bassist Joe Fonda pick up where they left off two years ago when they released their first duo album, titled simply Duet, to rave reviews. Mizu, recorded live on a 2017 European tour, finds them delving deeper into their musical connection. There’s a surprise around every corner as these two play with even greater emotional abandon, lyricism, and freedom.  The album will be released July 27, 2018 via Long Song.

At the urging of a festival producer in Europe, Fonda contacted Fujii in 2015 to see if she’d like to get together to play. They eventually were able to coordinate their busy international performing schedules for a New England tour later in the year. They managed two other concerts before their next opportunity to play together for an extended period emerged, on a 2017 four-city European tour. The tour produced the music on this new duet CD, as well as Triad, a trio recording with Italian saxophonist Gianni Mimmo released earlier this year as part of Fujii’s 60th birthday celebration.

Despite a lengthy gap between performances, the chemistry between Fujii and Fonda has grown. “I find that the more we play together, the more free we feel to take risks. We talk to each other in music,” says Fujii.

Fonda agrees. “Now that we’ve had a chance to play together more, the vocabulary and the possibilities that we’re using have expanded,” he says. “We trust and respect each other, that’s where the freedom comes from.”

The freedom results in exhilarating music that is both inviting and challenging. On “Rik Bevernage,” a dedication to the late Belgian concert producer and label owner, there’s an elastic give and take between Fujii and Fonda as they exchange ideas and develop them. Sharp percussive motifs give way to flowing waves of music and then to sounds of unusual timbre. Fonda sounds especially inspired on this track, joyfully springing off in his own direction one minute, then curling around Fujii’s piano inventions like a vine. “Long Journey” also finds bass and drums in perfect sync, playing in parallel without ever directly echoing or following the other. “Mizu” is focused and unhurried as it winds its way through one fascinating musical landscape after another. Throughout the album, the pianist and bassist are co-equal creators, with no sense of a leader and an accompanist, just two voices intertwined in a profound dialogue.

“I would not get the same inspiration from Joe if he played only like an accompanist,” Fujii says. “For me instrumentation and traditional soloist-accompanist roles are not that important. Who I play with and the quality of their ideas and willingness to work together are far more important to me.”

“I feel free to play whatever I want and so does she,” Fonda says. He points to a moment on the title track to illustrate what he means. “There is a place where I start singing. I remember all of a sudden Satoko started playing something that sounded like opera to me. And I said to myself, wow, someone’s gotta sing—and that’s what I did. This is the kind of freedom we’ve arrived at.”

Mizu is performed, among others, by