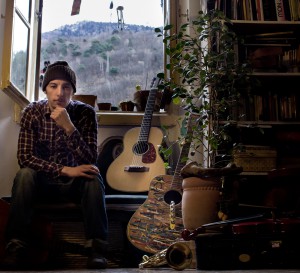 LABOULE is Paolo Novellino: he was born in Milan in 1984 and grew up in Valtellina, among the mountains and trees to be climbed.
Guitarist by birth and poly-instrumentalist by necessity, with the desire for adventure, he spent his time in the valley exploring the guitar and founding several bands as a poly-instrumentalist.
But after listening to “Rocky Mountain raga” by Robbie Basho, he got back to the guitar with the stage name LABOULE. As LABOULE, he has self-produced an EP with the same name, which has been promoted with several concerts as the opening act for Musica da Cucina.