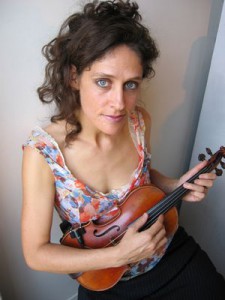 She has four releases of original music under her belt, the last of which, 12 Songs, was named by the New York Times (Ben Ratliff) as one of the Top Ten Albums of 2005. She will be releasing her next two on May 27, 2008 on Koch. The eponymous Jenny Scheinman, produced by Tony Scherr, is her debut recording as a singer and it focuses on the American folk/country/rock music of her childhood. Crossing The Field is her fifth instrumental release and features Bill Frisell, Jason Moran, Ron Miles, Doug Weiselman, Tim Luntzel and Kenny Wollesen (who also appear on Jenny Scheinman), plus a string orchestra led by Eyvind Kang and Brooklyn Rider.