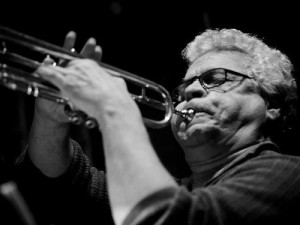 Herb Robertson: Trumpeter Herb Robertson met alto saxophonist Tim Berne in the late 1970s where he first gained attention for his playing with Berne’s groups during the years 1981­87. His lyricism, tonal distortions and use of mutes looked back to jazz’s past, while his freer improvising was quite futuristic, fitting in very well with Berne’s music and passionate alto playing. During this period he also became a band member of long time collaborator, bassist Mark Helias and drummer Gerry Hemingway. He has been active as a member of the NY Downtown Improviser’s scene since 1980. Herb has since traveled the world always playing in jazz and creative music festivals. He brings a special kind of modern lyricism through his trumpet and other wind­type instruments, having influenced younger generations of trumpeters and musicians alike.

Robertson’s music is simultaneously a game of equals and a parody of excesses, with an irreverent use of structured freedom. It is also an obtuse refraction of Ellingtonian hues and blues that’s both dramatic and compelling. Whether it’s complex large group arrangements or free form duets, Herb Robertson brings his wide knowledge of jazz history along with his original voice and adventurous spirit to each session. He has recorded extensively and can be heard on many CDs, radio and tele-broadcasts.